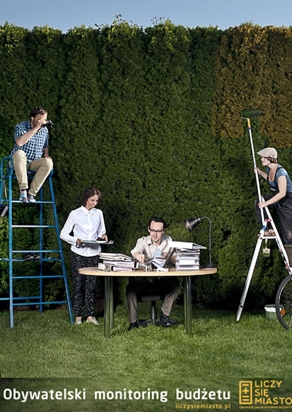 A few weeks ago an expert meeting about the project 'Leer de stad' in Poland took place. This project is an experiment about budget monitoring and participation of citizen in two Polish cities. During 15 months a workgroup consisting of citizen analysed the budget from Kalisz and Konin. They translated the content of the budgets - written in professional language - in understandable language for every average habitant. The workgroup suggested to talk together in a new way about the city to learn more about urban affairs. The progress and results of the project are described in a publication of One World in the form of a mini-guide.

In this project residents from two associations joined their forces; Local initiatives Kalisz and AKCJA Konin. Among them are financiers and accounts, with different backgrounds but one common goal: strengthening citizen participation. The results of the experiment were presented in the town hall in Kalisz at 30th of September 2014. OneWorld and Local Initatives will propose 6 recommendations in consultation with management and residents:

The progress and results of the project are described in a publication of OneWorld in the form of a mini-guide.

Info about the associations:

AKCJA KONIN:
The Akcja Konin Association is a local organisation, whose main aims are to participate in monitoring the actions of local authorities, creating a independant forum of exchange of information, introducing real public consultations on burning local issues and integrating associations and foundations, so that they can support each other and begin to consitute a force capable of influencing the actions of local authorities.

Both, KIM and AK bring together local activists who know very well their environment and it's specific conditions and have unique knowledge about social, economic and political situation of Konin and Kalisz.

Info about the cities:

KONIN
Konin is a town located in eastern part of Wielkopolska. It currently has about 80 000 inhabitants and has lost its importance after the administrative reform of the country (it use to be a capital of the province). City budget is about 370 million PLN. More than 50% of the population is of working age, but this group continues to decline: young people are leaving, a number of retired pensioners group is growing, which increases the budget for social services.

Over 300 NGOs operates in Konin, most dynamic of them deal with social welfare. There is no other organization with a profile similar to the Akcja Konin.

In response to that "Action Konin" conducted a research among citizens of Konin and developed a Citizenship Strategy for the City in 2020 - the document has already been submitted to the local authorities and is disseminated among the people.

KALISZ
Kalisz lies in the middle of a triangle defined by three metropolitan areas: Wroclaw, Poznan and Lodz, each of them located in about 100 km distance. The city has currently 102 000 citizens. In 2000 there were 110 000. The decrease resulted in emigration to the West and the outflow of young people to larger cities where it is easier to work and access to cultural life. There are 276 registered NGOs in Kalisz. The number is growing from year to year and they become more active. The local government is formed by a president (elected by direct election) and City Council with 25 councilors. There are six local newspapers and two internet portals, local television and radio. The level of journalism is very low, publishers employ young people without qualifications and experience to reduce costs.

It is clear that the traditional representative democracy in Kalisz is experiencing a major crisis. Government officials do not see the need to implement a participatory model of democracy, and talking about it is perceived as an attack on their constitutional prerogatives. Discouraged citizens complain but do not know how to organize and to act as an equal partner in negotiations with local authorities. Media control authorities superficially, they don't carry out debates on important issues, do not initiate any social actions. A professional and thorough monitoring of the budget of the city is very much needed and could become a source of its transformation