How to discuss taboos in closed communities?

How to discuss taboos in closed communities? The Dutch theatre group Formaat wanted to improve its way of addressing such issues in immigrant communities and in traditional Dutch communities. The group Formaat sought and found answers with GTO Maputo, a theatre group from Mozambique, which raises awareness on HIV and AIDS. Not uncommon in countries where infection numbers are rising, but the vast majority of these campaigns focus on the use of condoms. GTO Maputo also addresses the root causes. 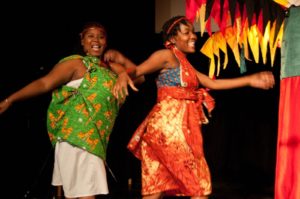 How to discuss taboos in closed communities?

How to discuss taboos in closed communities? The Dutch theatre group Formaat wanted to improve its way of addressing such issues in immigrant communities and in traditional Dutch communities. The group Formaat sought and found answers with GTO Maputo, a theatre group from Mozambique, which raises awareness on HIV and AIDS. Not uncommon in countries where infection numbers are rising, but the vast majority of these campaigns focus on the use of condoms. GTO Maputo also addresses the root causes.

HIV and AIDS in the Cape Verdean community

Formaat touches on issues that are controversial in society. The group constantly looks for input from colleagues -often from the South- who face the same questions and try to find innovative solutions. In this E-motive exchange Formaat asked GTO Maputo to join in Forum theatre about HIV and AIDS for the Cape Verdean community in Rotterdam. The taboos on sex-related issues are very strong in this community, the number of cases of Sexual Transmitted Diseases (STD) is above average and there are significant problems regarding sexual violence. Colleagues from the South were eager to learn from the North, about used techniques and how to engage with new target groups.

Causes of the HIV and AIDS epidemic

According to GTO Maputo, the causes of the HIV and AIDS epidemic in Mozambique lie in society’s patriarchal structure. The theatre group investigates the mechanisms that stop people from taking precautions or being tested, on stage. It also addresses gender issues, the attitude towards sex amongst young people and the availability of medicines. GTO Maputo stages performances about these issues in a community-based way, not through education, but through open dialogues, which challenge the public to join in. Repeating the plays is an important element of this method.

In May 2011 Alvim Cossa, artistic director of GTO Maputo, and his team trained their colleagues from Rotterdam. He taught them that intellectual considerations are not needed to show different strategies for difficult situations on stage, so women get more choices and men can reconsider their positions. GTO Maputo improved their joker techniques by watching Formaat’s plays, as well as their capacity to work with techniques, like the open-circle model and story-telling.

In July 2011 Luc Opdebeeck, artistic director of Formaat, paid a return visit to GTO Maputo in Mozambique, when this theatre group celebrated its tenth anniversary. He learned from the way they give the public ownership: GTO Maputo understands very well the subcultures of its specific target groups and co-operates with other organizations on an equal footing – while Formaat is more inclined to take assignments from semi-government institutes involved with raising awareness about sexually transmitted diseases. OpdeBeeck also learned that neutrality is very important for engaging all stakeholders in finding solutions, giving victims and victimizers a chance to identify with the ones on stage.

The project ‘The Bitterest Taboo’ has been completed, but Formaat’s artistic leader Luc Opdebeeck would not be the man he is, if he did not stay in touch with exchange partner GTO Maputo. Unfortunately the Mozambican organisation is not doing well. Heavy rainfall in January 2013 destroyed the whole video and audio archive, office equipment, office tables, computers, shelves and various documents including research and activity reports.

Luc Opdebeeck is supporting its efforts to rebuild its actions, with a request for donations on Formaat’s website: “Save GTO Maputo”: www.formaat.org/nieuws/gto-maputo-needs-support/

‘We learned how to make plays fascinating within 10-15 minutes and how to come to the point directly, for example by introducing new characters in no more than three sentences. I saw how Alvim Cossa builds trust with the public through some simple warming-up games and then addressed his topic straight-forward.’

‘The Maputo team has showed me what ‘the art of listening’ is all about. To listen to one another with full attention, and to listen to what is to be heard… To realize that participants really want to be seen and heard, that was the most important message.’ 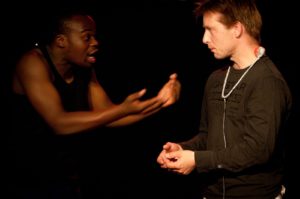 The actors of GTO Maputo create their participative performances around specific themes. To prevent diseases like AIDS and HIV, they motivate their audience to use condoms, but not in an educational way. Instead, they invite people to interact with them on stage. To involve them on markets and public squares, they introduce their themes in a very short and direct way. They introduce their characters in a few sentences and leave out all the intellectual considerations. They come to the point quickly. Alvim Cossa starts with some games to warm up the public. Then he turns straight forward to the essence of his work.

Method Theatre of the Oppressed

Theatre of the Oppressed was first elaborated in the 1960s, by theatre practitioner Augusto Boal in Brazil. He inspired others around the globe to use forum theatre techniques to empower vulnerable people. In this form of participatory drama, so called jokers invite the public to join in, so spect-actors get a chance to practice difficult situations. Together they explore, analyze and depict such situations in an attempt to encourage social and political change. In different parts of the world the theatre groups involved in this kind of theatre, have developed their own specifics.

GTO Maputo is one of the biggest Theatre of the Oppressed organizations in Africa. It is active all over Mozambique, bringing together over 3,000 practitioners, spread over more than 120 theatre groups in 93 Mozambican districts. These theatre groups act on different frontlines of social mobilization, such as health, education, environment, governance and citizenship, access to information and accountability, children’s and women’s rights, among other areas of community interest.

GTO Maputo has been developing theatre for 12 years now, throughout the country, through arts and culture with a stronger emphasis on the languages of Interactive Theatre, for a combined reflection and collective search of alternatives to the various problems facing the community, as well as by exchanging ideas and opinions.

However, heavy rainfall in the city of Maputo in January 2013 has completely destroyed the operational capacity of GTO Maputo. The whole video and audio archive, office equipment, office tables, computers, shelves and various documents including research and activity reports were completely destroyed. GTO Maputo is now trying to rebuild its actions.

Formaat is committed to helping marginalized people, vulnerable people and people who find it hard to put themselves forward and participate in society.

The means is theatre. Through participative drama Formaat wants to give people the chance to learn about developing life strategies, rehearse for the real world, and start dialogue of peers. Formaat also provokes people into thinking. What would you do in such a situation? What can and must be different? How do you prevent it? Forum theatre is one of the core activities. The theatre group facilitates participative drama across the country; in secondary education, shelters for the homeless, vocational training, care institutions … and even in the lower house of parliament in The Hague. The organization also attaches importance to sharing with others, the methodologies, knowledge and experience. Formaat is also a Knowledge Centre with, among others, a training course on Participative Drama.