In the absence of an active government, citizens themselves have to tackle the problems in their community. But how can they improve their neighbourhood and achieve sustainable results? Kwanda is a method for community development, where participation and the development of residents’ active participation take centre stage. In South Africa Kwanda has had a huge impact on combating unemployment, violence against women and on preventing HIV and AIDS. Notable is the large number of residents who participate in a project, thus enhancing the impact. The South African method of Kwanda is now also applied in the Netherlands.

You can download the e-book “Kwanda Amsterdam, Organising for Social Change” here. 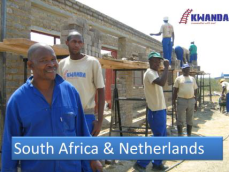 In the absence of an active government, citizens themselves have to tackle the problems in their community. But how can they improve their neighbourhood and achieve sustainable results? Kwanda is a method for community development, where participation and the development of residents’ active participation take centre stage. In South Africa Kwanda has had a huge impact on combating unemployment, violence against women and on preventing HIV and AIDS. Notable is the large number of residents who participate in a project, thus enhancing the impact. The South African method of Kwanda is now also applied in the Netherlands.

Kwanda teaches residents how to organize

Kwanda leads to a sustainable change in the community, whereby residents make the choices that matter to the community and take on the management of a number of paid-for maintenance and care tasks. This is cheaper and the involvement and quality are higher than is the case with outsourcing to third parties. An important component is to increase the residents’ skills, based on learning by doing. Residents get going with the projects they have selected, and are simultaneously trained and coached in organization skills, conflict management, cohttps://emotiveprogram.org/wp-content/uploads/2014/07/aVu2Ttfz5-dEgnFUm031xawqJlvXJY2NDiSEOMcWQmg-e1406102593504.png-operation and leadership, but also in the needed technical skills. Kwanda means growth: as neighbourhood and community, and as resident.

Citizens regain ownership of their own situation

The Dutch government wants to give citizens a more active role in managing their living environment. The Kwanda method fits well with the search for ways of operationalizing the new role of governments, welfare organizations and residents. Kwanda leads to improvements in the living conditions and to sustainable changes in the awareness and behaviour of people in deprived areas. From dependent citizens (struggling to survive) they grow into active citizens tackling together the social-economic problems in their neighbourhood. Instead of a policy’s target group, they become partners in the implementation, and regain ownership of their own situation. All these communities together make an important contribution to the democratic building of society as a whole.

Deprived neighbourhoods in Amsterdam experiment with the Kwanda method

In 2010 ASW, Diversity Joy and the municipality of Amsterdam organized conferences and workshops where Gavin Andersson and Lebo Ramafoko, founding father and mother of Kwanda, demonstrated the methodology and results of Kwanda. Amsterdam municipality then decided to run pilots with this new approach in three neighbourhoods of Amsterdam. In 2012 Kwanda Netherlands and Kwanda South Africa organized the Global Locality Week in Amsterdam, where the South African founders gave workshops en masterclasses on the daily practice of learning by doing, civic driven change and activism for social change. Late 2014 a group of regional and national stakeholders will visit South African to experience the methods and results in situ. There are plans for setting up a community of practice with South African and Dutch parties to further develop and disseminate Kwanda. 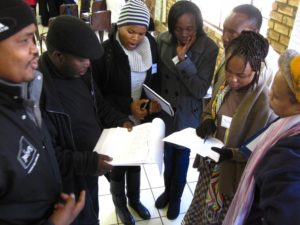 The Kwanda method is made up of 4 steps. After an inventory of the forces and things to be improved in a neighbourhood, the residents follow a training programme where they develop their organizational skills. They then start working for a period of 4 to 6 weeks on a work order they have acquired. When several autonomous projects have been launched, the search is for an overarching organizational structure that functions as financial, legal and organizational back-up.

Step 1. Community mapping: making an inventory of the neighbourhood

When there is enough support among residents, welfare organizations, businesses and government officials the work is launched. In the first phase the residents map the main problems and solutions, and the human and material support they would need. For a balanced picture of the forces and things to improve, it is important that the group of residents is a good representation of the neighbourhood.

The residents then take a closer look at the local economy: Plugging the Leaks. It is an assessment of the ways in which available money can be put to better use in the community, of the projects that can be economically feasible, and of where the residents can really release their energies. The most important, feasible ideas are selected for drawing up work plans in the next phase.

The organization workshop is an intense training programme, based on the principle and practice of learning by doing. Resident start working on the projects they have selected, whereby they simultaneously get training and coaching from professionals on organization skills, technical skills, financial management, conflict management, co-operation, leadership, et cetera.

In short: the development of competences among community members. The individual development of participants and their role within the collective are important components of the Kwanda method.

What happens in practice

Over a period of 4 to 6 weeks a large group of residents has access to materials, accommodation and other resources to start working in an untroubled manner. They sign a contract with 'the crew', which acts as a client (sometimes on behalf of real clients, sometimes within the project only) and must set up an organization whereby they can make their project economically feasible, to ensure its continuation after this phase.

Residents consequently learn to make a business plan, including financial underpinning (lobby of businesses, finding sponsors, acquiring orders and start-up capital), because afterwards they will be fully responsible. The project must contribute to the neighbourhood, for instance a restaurant for single people or a vegetable garden. The goal in this phase is for them to take on management responsibilities of the project within a short period of time, to break even, run the project and keep the books.

Through concrete activities (learning by doing) participants experience how to improve their day-to-day lives through joint action, without being (solely) dependent on subsidies or institutions. They learn to view differently their own possibilities and those of others, and finances too. The community’s ability to solve problems, organize and take action grows. This creates a lively range of initiatives that enhance the sense of community (security, liveability, social cohesion), tackle concrete problems and deliver (the perspective of) improvements (small-scale community enterprises) in their own social-economic situation (and that of their children). Residents can do many things by themselves, in e.g. small-scale community enterprises. It empowers people and puts them in charge (again) of their lives, and thus enhances the sense of ownership.

Once a number of autonomous projects have been launched they are connected by means of an overarching organizational structure. That can be an association, foundation or co-operative, for instance. The structure is selected and directed by the residents, with the aid of advisors and professionals from the council, corporation, community developers or businesses. The goal is to keep monitoring existing projects and help new ones get started. It provides a financial, legal and organizational foundation, and facilitates growth to more income. Especially the cooperative association seems to lend itself well to this.

Step 4. Use of the media

(Local) television is used in some Kwanda projects. The selected communities start a kind of competition to get the highest marks and create the best changes in a neighbourhood. This is all put on film by Soul City. In South Africa this has had a huge impact on e.g. combating HIV and AIDS and violence against women. In Amsterdam there are pilots with community television.