Forging strong ties with Theatre of the Oppressed

Theatre of the Oppressed is about universal themes, such as domestic violence, discrimination of minorities and the oppression of women. During performances members of the audience can join, and become spect-actors. They get the opportunity to tackle difficult situations from daily life. The Rotterdam theatre workshop Formaat uses participatory theatre to get minorities to emancipate themselves, and wants to give the stage to as many vulnerable people as possible. The group was also inspired by Jana Sanskriti, a theatre company from India that has strong ties with tens of thousands of members in West Bengal. 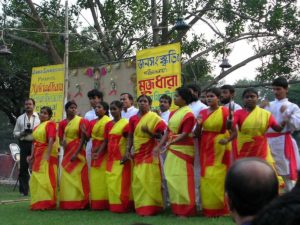 Forging strong ties with Theatre of the Oppressed

Theatre of the Oppressed is about universal themes, such as domestic violence, discrimination of minorities and the oppression of women. During performances members of the audience can join, and become spect-actors. They get the opportunity to tackle difficult situations from daily life. The Rotterdam theatre workshop Formaat use participatory theatre to get minorities to emancipate themselves, and wants to give the stage to as many vulnerable people as possible. The group was also inspired by Jana Sanskriti, a theatre company from India that has strong ties with tens of thousands of members in West Bengal.

A lack of language skills and cultural differences result in not all immigrants actively participating in the social life in their new country. The Rotterdam theatre workshop, Formaat, wants to give them a voice. In collaboration with Jana Sanskriti in the Netherlands, Formaat wants to show that controversial themes, such as women’s and girls’ rights, can also be dealt with in a traditional society in a confrontational but respectful manner, focussed on solutions and without stigmatization.

At the forum theatre actors play out social contradictions, whereby the lead role suffers a defeat. The actors invite members from the audience to take over that role, to find out how he or she would manage the situation. Through participatory drama Formaat instigates a dialogue among residents and between residents and the authorities, and Formaat makes people aware of their values and norms, for instance regarding sexuality. During the performances Jana Sanskriti calls for social action.

In 2008 an E-Motive exchange took place: eight team members of Jana Sanskriti arrived in Rotterdam. Their visit attained a high point in a play about marrying off women: a Moroccan teenage girl took over the lead role in the inspection scene. The prospective groom and his father touched the bride as if she were cattle. Angrily she beat those hands off her. She left the stage, applauded loudly by the Muslim women present. Rather not married then! In December 2008 two members of Formaat visited the Muktadhara Festival. It helped both theatre companies to see certain themes in a global perspective and enhance international solidarity.

New to Formaat was the smart use of public space and razor-sharp symbolism. In India Jana Sanskriti easily mobilizes 5,000 spectators. Jana Sanskriti’s performance in the Netherlands also drew an audience that had never seen Formaat, even though the plays were in Bangla. The audiences included Turkish women, Moroccan children and Surinam men, among others.

Jana Sanskriti taught Formaat that Theatre of the Oppressed demands more than making theatre. In India Jana Sanskriti is a broad movement of theatre makers who build lasting, strong ties with landless field labourers. As a result Formaat has begun to work (yet) more community focussed, through play in community theatre workshops, and often with the most vulnerable people in our society, such as the homeless.

"Jana Sanskriti taught us that we have to dedicate our work to change. When we make theatre for the homeless, of whom many deal with debt management workers, we also involve their supervisors and coaches from social services."

"In countries like the Netherlands a concept like community art, means culture for the people. In India it is about culture of the people."

"It was clear to all of us that economic independence is not freedom. We learnt Image Theatre, the language of the body, how the body speaks, thinks." 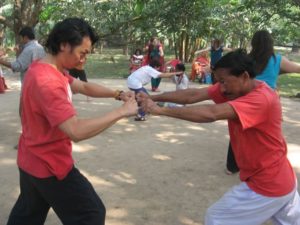 Jana Sanskriti makes theatre for vulnerable people in India, often landless, impoverished people. The actors put situations on stage they can recognize, so the people can interact in practicing new approaches to current dilemmas and conflicts. The performances are part of a broad movement, reaching thousands of people.

Theatre of the Oppressed was first elaborated in the 1960s, by theatre practitionerAugusto Boal in Brazil. He inspired others around the globe to use forum theatre techniques to empower vulnerable people. In this form of participatory drama, so called jokers invite the public to join in, so spect-actors get a chance to practice difficult situations. Together they explore, analyze and depict such situations in an attempt to encourage social and political change. In different parts of the world the theatre groups involved in this kind of theatre, have developed their own specifics.

Formaat is committed to helping marginalized people, vulnerable people and people who find it hard to put themselves forward and participate in society.

The means is theatre. Through participative drama Formaat wants to give people a chance to learn about developing life strategies, rehearse for the real world, and start dialogues of equals. Formaat also provokes people into thinking. What would you do in such a situation? What can and must be different? How do you prevent it? Forum theatre is one of the core activities. The theatre group facilitates participative drama across the country; in secondary education, shelters for the homeless, vocational training, care institutions … and even in the lower house of parliament in The Hague. The organization also attaches importance to sharing with others, the methodologies, knowledge and experience. Formaat is also a Knowledge Centre with, among others, a training course on Participative Drama.

The organization also considers it important to share methodologies, knowledge and experience. That is why Formaat is also a Knowledge Centre with a course, among others, in participatory drama.

Jana Sanskriti started 27 years ago, when a group of dedicated people got together to try an experiment in utilizing theatre as a method of social change. Actors were all from the distant remote villages. The idea of democratizing theatre took shape in their minds after their encounter with the work of Augusto Boal, the theatre theorist and practitioner who may be said to have been the inventor of ‘Theatre of the Oppressed'. Having the same roots as Paulo Friere (who invented ‘Pedagogy of the Oppressed'), Boal started off theatre movement in various parts of the world, envisaging theatre as a powerful tool of change.

This method builds up a cultural movement that is based on humanism, equips people to fight against the oppression they face in their daily lives. This movement strives to remove the culture of monologue (at home between man and wife, father and children; at school between teacher and students; at work between employer and workers) and to establish a habit of dialogue. This is the first step towards democracy, which empowers us. Jana Sanskriti came into being with a deep commitment towards building up of such a cultural movement.

A firm belief in the strength and efficacy of theatre as a tool, not only of communication but also of empowerment, has resulted in the formation of 30 theatre teams today. Staging theatre performances in and around their villages on pressing current issues is the main focus of these teams. Jana Sanskriti seeks to stop the oppressed people from thinking that they are inferior, weak and incapable of analytical thought. They can provide dynamic leadership, if the culture of monologue is broken and dialogue established at various levels in society.