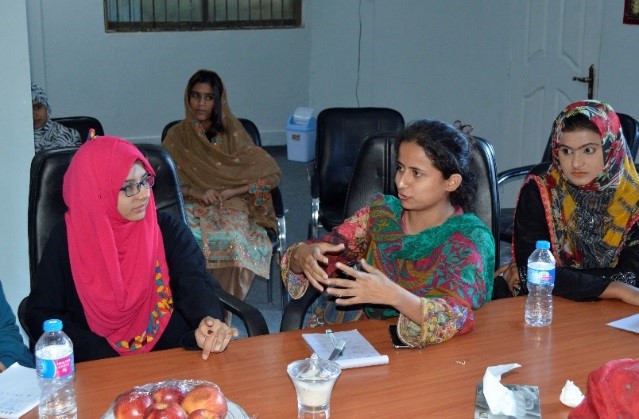 It seems like yesterday when EYW Pakistan team returned from Emotive exchange visit of Nepal with bucket full of ideas to implement in the districts of Layyah and Jamshoro and spin the wheel of entrepreneurship in right direction. But it wasn’t as easy as we all thought as yet again we had to give our day and night to shift the paradigms specially when it comes to bringing the girls into business arena.

However with high hopes we began implementing the learnings gathered from Nepal around promotion of youth as entrepreneurs, solutions for women’s safe mobility & mentorship model to support young entrepreneurs, tools for entrepreneurship and solutions for hub sustainability.  From READ centre of Nepal we learned that to make any incubation centre successful you need to have multiple sources of revenue attached to support its ongoing operational cost at the very least.  So we came back and designed our own incubation centres aka Innovation Hub Pakistan (in both districts) keeping in mind the model of outsourcing the training halls as well as canteens as an initial income generation micro enterprise models for hub’s sustainability from day one.

From the Rock start impact we came back with learning about 100 day acceleration program to support the growth of existing SMEs and planning to roll out this year under our own SME program with minor tweaks and changes. From Himalayan climate initiative’s Green angels model we have already rolled out a campaign named “Clean and Green campaign” in one of our district Layyah. One component of this campaign is to initiate a movement for the removal of plastic bags and as at the same time create demand for the hand woven bags to be used in place of the plastic bags to create a source of income for rural youth.

Last of all, we learned the ingredients for creation of community based entrepreneurial ecosystem from the Women Rural Enterprise Accelerator Program (WREAP) of Daayitwa and importance of linking the existing women entrepreneurs with the new ones for one- one mentorship. Also using the social media and other communication channels to promote the existing entrepreneurs for garnering the right support from the investors as well as community.

As accustomed whenever a delegation comes it is always the approach to show the greener side of the meadows. But had the EYW team Pakistan applied the same approach it would never had received the insights that were and are needed to make the whole model of entrepreneurship work in rural districts of Pakistan. Hence the reason for planning the perfect blend of program with a dash of meetings and interesting field visits at both districts with our precious Cargo of delegates from Nepal : Director and Co-Founder Tara Prasad Panti Daayitwa, Program  Director Chatra Bahadur Khatri from READ Nepal and Sumnima Dewan Community Manager (Rock start Impact) towards district Jamshoro of Sindh Province.

Together with Stakeholders & conglomerates

The meeting began in the Meeting hall of our very own Innovation Hub Pakistan (Jamshoro Chapter) stakeholder such as DCO Jamshoro, Director agriculture department, Deputy director chamber of Commerce etc where the necessity of having agri based business together with building markets for organic products was emphasised. Further need of innovative technological solutions to yield maximum quality product for ever increasing market demands and growing population was also deliberated upon in detail. Afterwards Nepalese met our innovators and the potential entrepreneurs discussed their ideas which were critiqued. The experts wore the much-needed hats of devil’s advocate and gave the feedback that if the need is to inculcate the culture of entrepreneurship among the youth. The development sector needs to be the solution driven entity. 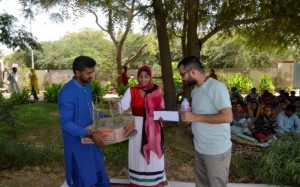 Next day the delegates met with young initiators group i.e. Youth group of Karo koh a village with mere population of 2200 people out of which 1100 are related to fisheries, 800-900 with farming, 50 associated with jobs and 50 are shop owners. In this village the delegates met with beneficiaries who are being supported under job training and through farming support packages.  The initiators who were trained on indigenous methods of farming such as tunnel farming or vertical farming communicated to the people what they have learned and even showed a miniature model of the learning tested practically in the field.

A glimpse of true empowerment in Jamshoro 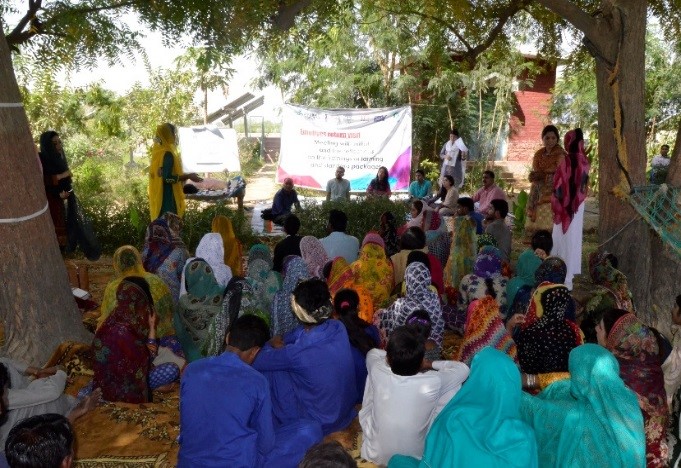 During the meeting a true glimpse of empowerment was seen where the female innovators trained and supported via farming package, standard packages and enterprise package organized the whole meeting and delivered the presentations in front of large audience inclusive of equal number of boys and girls for the first time.

In the land of Layyah

During the meeting with stakeholders Punjab Disaster Provincial Management Minister once again voiced his original commitment to link the Innovation Hub Pakistan’s Layyah chapter with their own mega project of 140 Million Pkr of a library and resource centre planned to be developed in coming years. 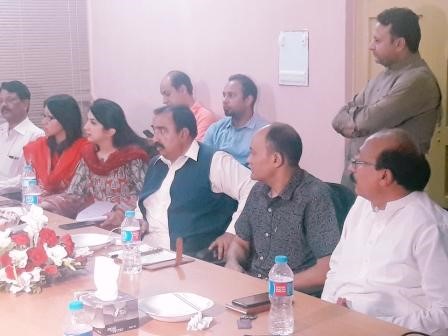 The very next day all began their journey towards the fields of Layyah where Innovator Shahida told them that she has started her own small vegetable farm within her house and is producing the organic fertilizer for quality growth of her vegetables.  After wards the delegates went to the demo farm where Aqsa and Ghulam Mustafa the initiators of the project showed them their sample tunnel farming at 11,000 sq.feet something learned under farming service package. Their initial investment was 25000 pkr but they are expecting profit cost of 1 lakh minimum which is a huge victory to achieve in such short time span.

The green side of Meadows

Although the visit was planned like a non stop marathon yet we tried our best to give the Nepalese a true sense of Pakistani culture and hospitality.  Even though there used to be so much in our minds at the end of the day yet we never let that exhaustion to compromise our hospitality.

The emotive gang was always ready for their next escapade. Be it the long walks to the local bazars or the mid night shopping spree or the ride in Rickshaw every second of the visit, every adventure was worth it. From bestowing the cultural blessings and tokens of remembrance to eternal hospitality the delegates were deeply impressed to get the cultural taste of Pakistan and shared high hopes for the project to be successful. The  experts were quite enthralled to see the level of progress that EYW Pakistan team was able to achieve despite many glitches and hiccups on multiple tiers (something they delegates witnessed themselves).

Positive role played by men of the community

For many it was quite invigorating to learn about the father or uncle of one of the innovator Maria who acted as catalyst of positive change within their communities in Jamshoro.

“They specially appreciated praises for the men who challenged the existing social norms and encouraged their daughter to get education and supported them in their journey to be farmers by choice. They indeed pointed out that sustainability of this project is dependent on strong collaborations something which Pakistan team has a clear inkling of result seen in their strong collaborations with government and ministers. Furthermore some approaches taken overall for awareness raising were much appreciated”.

Even though we all felt radiant and thankful for the praise bestowed so generously we were also looking forward towards some hard talk which naturally came after a big and laden  “BUT”. The advice from experts that follows is although you are going in right direction but the work still rests in silos. The strong connections among innovators, initiators and incubates are necessary if the goal is to have better impact in terms of resource efficiency and sustainability. There is a dire need to take remedial measures so as not to lose the existing lot of entrepreneurs and youth in which the project is investing in. Lots of incubatees at both districts are interested in tech based innovations. But from the looks of market and target area there are more opportunities in other sectors specially in relation to agriculture where people are looking for solutions to real time problems that might not be relevant to technology at all.

The hub as an infrastructural resource works wonder but the line of thinking from here should be whether the hub is able to perform the function for which it is formed. Are the people in hub have that entrepreneurial mindset required to deliver as per needs and demands of kaleidoscopic incubates such as that of the ones associated with agriculture or with tech based ideas

To survive the hub must learn to generate profit and start thinking on financial sustainability factor. The hub should have revenue return based relationship with the beneficiaries as a first brick for sustainability and think of subletting its training hall or space as sales outlet for beneficiary products. Further it must have multiple sources of income at one time. Which means the people must learn to operate with futuristic approach and innovate to link with macro business initiatives for creating desired impact.

Community engagement and ownership is critical for the program success, impact and continuation in many ways. Currently steering committee formed for managing the operations of the hub is comprised of representatives from Oxfam and Partners. But from here Oxfam should start thinking that what would happen when project would end.  Hence the strategy to be applied here must be to enrich the community ownership and engagement by meaningful participation, representation, involvement and promotion of volunteer engagement. And by making them part of steering committee in the longer run.

Rather than duplicating the services connect with the existing government led services and support through available resources to reap maximum results. Hubs can be a central point to link with existing technical institutes and training centres owned and led by government which is essential to increase its credibility and ensure sustainability in the longer run. Mentorship is necessary for young entrepreneurs to be successful and linking with mature local mentors with rich experience is the key for them to understand the dynamics of business.

Overall the major emphasis was that not everybody can be an entrepreneur. To make one you  need to juxtapose your development approach with enterprise  mindset  which would be the key to cultivate the culture of business among youth and specially young girls.